commissioned by the Bavarian State Opera

"amazing and extreme - a wild experience."

"Berheide was able to rely on a libretto by the evening’s director, Amy Stebbins, that allowed repeated permeation by other texts from Kleist (for instance, from “Homburg”), Karoline von Günderrode, and even Joschka Fischer and Donald Rumsfeld. Kleist's play was fanned out like a dream diary, in which all comes together, reality and appearance become inseparable from one another. . . The stage for this was superb [...] Flexible projections of frames divided this space again and again, even generating virtual prison cells; the green light suggested those night-vision videos (the kind we see from current wars) and, together with the linear design, created a surreal, unsettling 3D effect."

"In [Stebbins'] version, Kleist’s excessive use of teichoscopy becomes a gateway for a media and perception critique, in which seemingly clear standpoints become increasingly unclear.... The text collage also makes the opera into an honorable antiwar piece. ... The massively applauded premiere of this in no way conceptually simple work had a lot to offer for both eye and ear. It is an encouragement to the Munich Opera, which path to follow in the present day."

Max Nyffeler, "A Jewel of the Opera Festival" 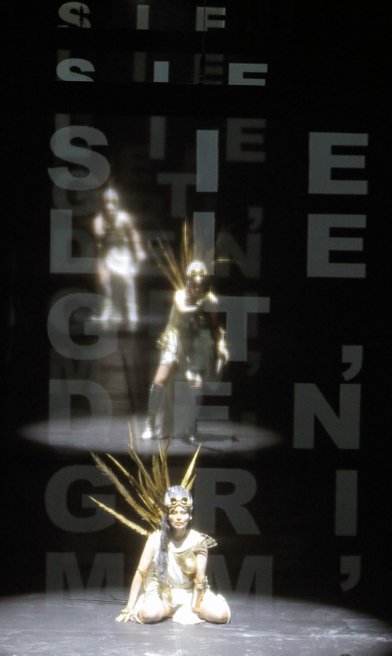 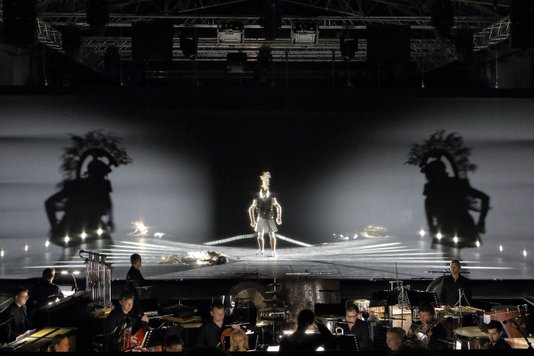 "Mauerschau" is a new opera that takes the Penthesilea myth as a starting point for an investigation of war and its public mediation. Over the course of 12 "pictures", the opera presents the multiple, contradictory versions of this ancient myth about the Amazon queen and her beloved foe Achilles, staging the epistemological crisis Penthesilea faces as she seeks to verify the truth of her own actions on the battlefield. Did she kill Achilles? Or did he kill her? How can she ever know? How can we?

The title "Mauerschau" refers to "teichoscopia," the theatrical device introduced by the Greeks, whereby an actor looks out over the audience and describes what he or she sees "over there". In Berheide and Stebbins' opera, this ancient mode of staging scenes of war and violence becomes a gateway for taking on the ethical dilemma of drone warfare, and what, since the opera's premiere, has come to be known as "fake news".